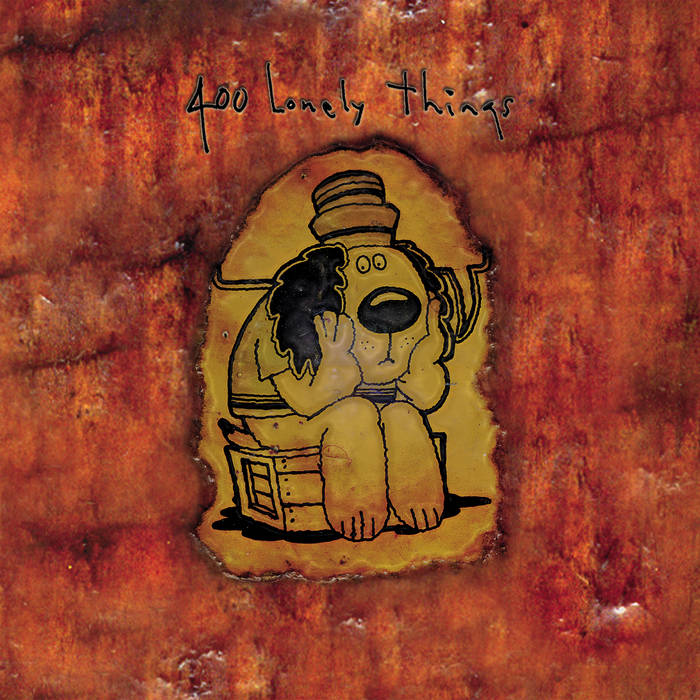 Here's some background information on how 400 Lonely Things (and this first album) came to be, starting with the sad little doggy on the cover...

The cartoon dog (we'll call him "Fido") and all wooden elements were scanned from a piece of art purchased for 25 cents at a thrift store in Jasper, Alabama quite some time ago. The dog picture was a page torn from some unknown newspaper or kid's magazine (most likely from the 1970's judging by the dog's manner of dress and the style of the illustration) - removed from context and mounted on a rough chunk of stained wood. This was then thoroughly shellacked by whoever it was who made it (there is no name on the "piece" nor on the pilfered illustration beneath the shellac). There's a little brass ring sticking out of the top, and this picture still hangs on my wall over my desk where I write this now.

Fido looked forlorn and anxious and sad. Not grieving or morose - but just doubtful and perplexed and mildly betrayed by a random number of non-specific things - the human condition on the face of a dog, in the pre-prozac era. It hung on the wall for many years and just doubted....

Our music felt the same way - a dark and bittersweet thread that kept quietly re-emerging over the course of many years of recording - eerie little orphans of creepy and sad yet oddly soothing music that never quite found a home.

When the name 400 Lonely Things arrived out of nowhere - the simple concept finally congealed and this earthy homage to a vague but earnest dejection began to assemble itself. The music became the soundtrack to whatever troubled our founder and mascot Fido, and Fido was in turn seen as our forlorn muse sighing through the music. All of this was called 400 Lonely Things and arrangements were made to give it physical form.

The record was pressed in a small numbered quantity and released on the (now defunct) Bronson Unlimited label in June of 2003. The marketing process eventually took its toll, the numbered editions are all gone, and 400 Lonely Things went home and didn't come back out to play for a long time.

About the recordings...
The albums opening number "Staying" I consider to be the 400 Lonely Things signature track and does a good job of establishing the tone of the rest of the album. It's typical of our method, a blend of nostalgic sampling, minor-chord structures and woozy repetition.

Material for this album was originally recorded between 1988 and 2003, although it should be noted that the track "Citizen's Band" contains field recordings my Uncle Jack made of himself talking on the CB radio in rural Georgia in the early 1970's.

For the digital release of this album, every single track was completely remixed. This new version was mastered by Mark Dann in 2008.