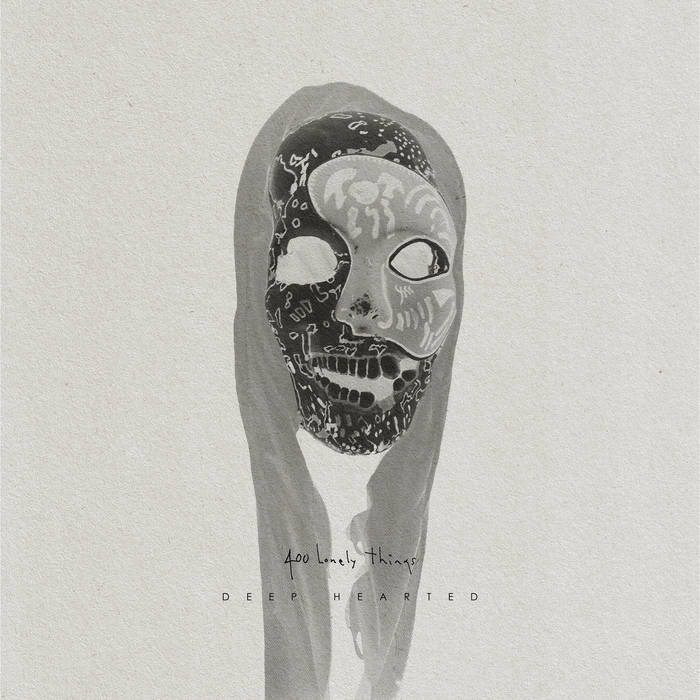 Walter Campbell I don’t listen to CDs anymore, but this is too good and special of a collection to pass on, with a very cool overview serving as a sort of listener’s companion.
Favorite track: Pawn.

All songs written by Jonathan McCall except:
Mass Injure Eve, Table Turn, Raja Mines, This is the End of the Line by James Alan McCall
Folklore by Lillian Mae McCall

A 20-page PDF of Digital Packaging and a selection of Bonus Tracks of some of the raw source material used in the making of this album are included with download.

This second volume of Deep Hearted is a sort of auto-obituary for Jonathan McCall, ghost-written by me (Craig Varian) and his two children, Lilly and James, using Jonathan's original unfinished compositions as source material, along with a handful of songs written to him by his children specifically for this album. It is being released on the two-year anniversary of his passing - August 18, 2022.

The first volume of Deep Hearted (released on this day in 2021) is my lament for the passing of my best friend and musical partner of 32ish years, Jonathan McCall. It is a collection of songs that I was writing with the intention of collaborating with him on; songs that I had and hadn't shared with him; songs written in geographic exile; and songs written for him after he died that I needed to write in order to deal with his passing.

This second volume of Deep Hearted is a little different, and it is itself broken into two volumes.

Tracks 1-14 were sourced from unfinished software-based multi-track files that Jonathan had started as far back as probably 1996. These tracks were works in progress running anywhere from 30 seconds to two minutes in length that he had shared with me over the years, embryos of songs that he liked but was unable to complete.

This inability to complete a song was something that hung over Jonathan's head from the mid 1990's until his passing in 2020. I discussed this with him seemingly hundreds of times over the years and there were a variety of factors at play - boredom, insecurity, restlessness, dissatisfaction, and frustration all played their parts. However, I think his biggest obstacle was letting go of the "idea stage" of a song or project and committing to its growth and permanence as a finished product beyond this idea stage. Jonathan always thought there was something better - a better song structure, better sounds from some better musical instrument or better piece of gear he felt he lacked, a better project concept, a better moniker for a project to work under - these things kept him in a perpetual and self-imposed sophomore slump and his song startings piled up a mile high in his junk drawer of song files. I could relate - I had been under a similar spell for a bit, too, until finally just leaning into 400 Lonely Things and hitting the gas. And Jonathan didn't always suffer from this - which ironically contributed to it: after earlier, perfectly realized projects of his like Seeping Beauty (late 80's) and The Lice Methods (early 90's), Jonathan was never able to reach that point again. The overwhelming validation he received from all who heard these tracks I think built up a fear in him - the fear of following them up.

When I was working on a 400 project, Jonathan would often ask me for the types of sounds and feelings I was looking for and then supply me with unfinished songs of his that he thought might fit the bill. Many of these songs have found their way into 400 albums over the past 20 years. In fact, the first volume of this Mourner's Companion series - Minutes A.D. - was composed almost entirely from unfinished songs that he sent to me to help shape into an album as his vigil and memorial for the passing of his own father in 2008.

While we often collaborated in person back in the day - in the same room, using instruments both digital and analog and recording to four-track cassette tape - proper collaboration between computer-based software platforms was difficult - and later physical miles between us compounded this. When we still lived near each other, Jonathan had gotten a PC in the mid 90's and started composing using a program called ACID. I had no computer of my own at this time and was in awe of the fact that with a computer you could see a visual representation of your audio. Eventually, after we had both moved far away from each other, I got ahold of a used Apple Quadra 650 of my own (I'd been using Apple products since the very early 1980s and was completely unfamiliar with anything that wasn't Apple) and finally started playing around with rudimentary music software myself, only to learn that there was no compatibility between his ACID files and my system that we could find. So, we found other ways of using software to collaborate, typically passing sound sources and stems back and forth.

At some point in 2017 or 2018, I was visiting him at his home in Indiana and I told him I'd get a PC of my own specifically for working with his ACID files. He copied his entire library over for me and told me to have at it. I got that PC but could never develop a comfort level with it or the software and eventually just gave the laptop to Jonathan. We went back to trading stems between our respective platforms.

After Jonathan died, I knew I had to redouble my efforts to get his tracks finished and out into the world. I spent a year using Windows emulation software and a fresh copy of ACID to resurrect and autopsy a hundred or so of these songs which I then rebuilt in the software I use. While this worked, the process was still full of obstacles - the main one being one that had always plagued Jonathan - missing samples, missing instrumentation, and missing effects (something that ACID is apparently notorious for). In these instances, I just disregarded any sample file that I couldn't locate. For the instrumentation that was missing, I substituted MIDI instruments that were similar to what I remembered hearing or in the case of songs I'd never heard, substituted instruments that made sense based on the notes he had played. For effects, I just went with whatever the song told me to do, following the breadcrumb trail that Jonathan had baked into these little skeletons.

The second half of this volume of Deep Hearted (tracks 15-35 digitally and Disc Two physical) are sourced a bit differently. Most of these songs are 2-track stereo mixdowns that Jonathan sent me over the years. As with the stem tracks, most of these were only a minute or two long - but unlike the stem tracks, I couldn't actually find the stems for these so these mixdowns are all I have. For these tracks, I've extended them and added effects and fucked with permutations like pitch and direction - but as with the first half, all of these source sounds were made by Jonathan. The next to last track on this album ("STE-003") is the last song Jonathan ever sent to me, in its entirety, unaltered. To him, it wouldn't have qualified as a song - it was the kind of thing he casually tossed off in the background while we were having beers with friends while some weird movie played on TV. In fact, this recording was done just to check and see if his portable digital recorder still worked. But it's the kind of impromptu comforting melancholic expression he would naturally go to when picking up an instrument.

Hidden among the tracks in this half are the real treasures. A couple months ago, I asked Jonathan's kids - Lillian (17) and James (15) if they'd like to contribute some playing to their father on this album and that I could give them the same remixing treatment that I've given his material here. Jonathan had been giving them both lessons in bass, guitar and ACID and they've obviously got his ear. The pieces they've contributed are as much Jonathan as themselves, just as these wonderful young humans are in real life. Musically, these pieces are so much like Jonathan's - I find it heartwarmingly unsettling.

The final kicker here - in what I pray is the last chapter in A Mourner's Companion - is the cover. A month or two ago, I'm sitting at my computer, fiddling around with ideas for the cover of this album, none of which I'm very happy with. James texts me. It's a picture of a mask. I've never seen it before, but my skin crawls as I instantly recognize Jonathan's craft. Jonathan made this. James texts me again to tell me that this is a mask he had just found in an old box of his dad's stuff, and that one of his earliest memories was as a toddler, sitting with his father as Jonathan made this mask. I immediately thought of the Roman Death Mask Jonathan sent me to build cover art from for Minutes A.D. and thought it was a rather haunting (chuckle chuckle) coincidence. It was like Jonathan was telling us that this was the cover image we were to use. I quickly made the album cover for this release and sent it over to James who quickly pronounced it "bad ass".

The next day, I was taking a second look at that cover and realized that among all the squiggly lines decorating this mask were three letters, right where the 3rd Eye goes - "TOT". As comprehension dawned, my skin crawled again and I googled these letters just to confirm my pathetic translation skills and as I suspected "TOT" is German for "Dead".

I did the math on James's recollection, and there's an extremely likely chance that Jonathan made this mask in 2008 as we were recording Minutes A.D. So, to recap, 14 years ago while recording the first entry in this series, Jonathan made his own Death Mask and then stowed it away so that we would find it in time for this release made of his music. Which is exactly something Jonathan would have done.

He had a talent for the dark stuff, and these heartfelt yet pensive, angry, disappointed and foreboding tracks of his are testament to that. These types of tracks were what we had always mined for 400 Lonely Things. But Jonathan was at home in any musical genre and could play anything. He was also fucking hilarious and for every dark shadow of a song that he wrote, there was a trip-hop remix of a Tom T. Hall song or a sludgy, crusty industrial metal song with samples of Strawberry Shortcake or Don Knotts for vocals or conversely an easy-listening lounge version of the theme from "Taxi" with nonchalant demonic vocal vamping. Jonathan loved to laugh and loved to make others laugh. You won't find that laughter here - this is strictly Sad Clown / Upset Wizard material. But in the future I will get our giggly shit out for all the shits and giggles they are worth. I'll also get his masterpieces - Seeping Beauty and The Lice Methods - out there as well. The world needs to hear these recordings whether it knows it or not.


BONUS TRACKS
Included as a downloadable curiousity, a selection of some of the unedited source material is included as bonus tracks.


As with the first volume of Deep Hearted, and as with Minutes A.D. - all proceeds generated by these aformentioned recordings (including this one) will go to Lillian and James McCall in perpetuity.

Kids: Your dad loved you so much. You two were the only things he knew he got right in his life. He is / was / will be so proud of you, as am I.

Much love to all,
Craig